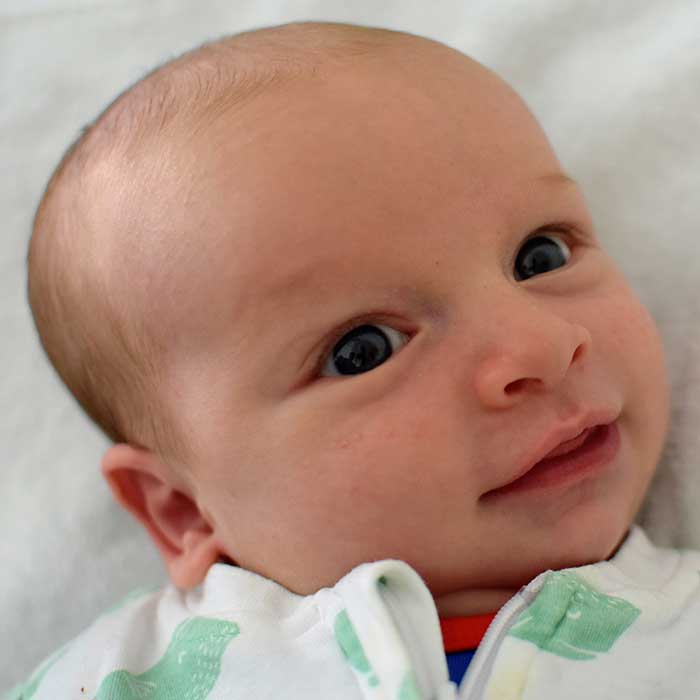 Visit the Music Lab with your baby!

We are now recruiting babies age 2 to 12 months for science research about the world's music. In the study, babies listen to songs while we measure their heart rate, pupil dilation, gaze, motion, and more!

We are conveniently located on Harvard's Cambridge campus, with free parking, and you can take home a Music Lab onesie or other cool prizes as a thank-you gift.

Please note that we are not currently running in-person studies due to the COVID-19 pandemic. You can still sign up to participate in future studies with your baby — we'll contact you when our in-person studies are back in operation.

If you are reading this, you are probably doing so on a device that plays music. You are probably able to hear and understand that music. You probably can also produce music of your own, even if you've never had music lessons. You probably engage with music on a regular basis, regardless of your cultural background, location in the world, or socioeconomic status. You have probably been this way your whole life.

In the Music Lab, we're figuring out why the human mind is designed in such a way that all of the above is true. We do basic cognitive science experiments with many different populations and with people who live all over the world, including in small-scale societies. We also work on large corpus studies of ethnographies and field recordings from the Natural History of Song project, which we host.

The Music Lab is based in the Department of Psychology at Harvard University. On this site, you can learn more about us and about our work, read our papers, and participate in experiments online! 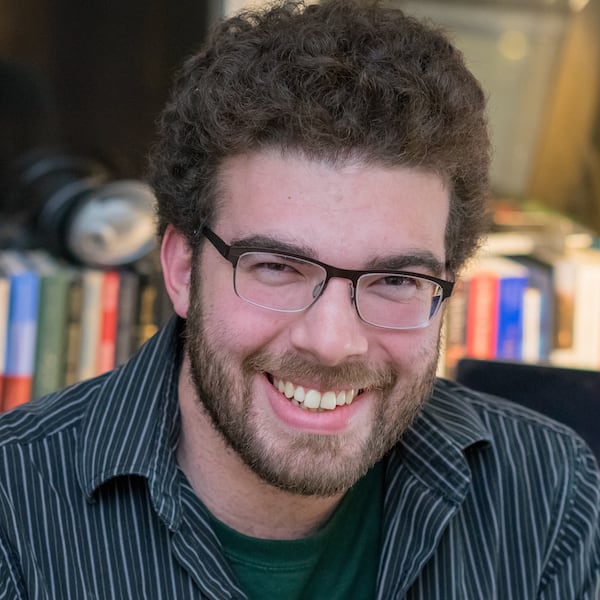 Principal Investigator (website)
sam@wjh.harvard.edu
Sam is an Eastman-trained musician and Harvard-trained scientist interested in cognitive and developmental psychology, music production and music perception, evolutionary anthropology, and other things. He grew up in Cambridge, MA and Lexington, MA. You can follow him @samuelmehr.

Lab Manager
Mila is a psychology graduate of Glasgow University, where she worked with social robot facial expressions. After a 15 year-long stint in Luxembourg, Scotland, and Spain, and having survived the British ABRSM piano exams, she's returned to her birth city of Boston to research what it is about human evolution and culture that has made us so responsive to organized sound. You can follow her at @mila_bertolo.

Postdoctoral fellow
Courtney is a cognitive scientist interested in music, language, and how people learn. Originally trained as a classical guitarist at the Australian National University, he then got distracted, accidentally getting a PhD on the topic of rhythm in language processing at the University of Sydney. He is also readily distracted by other pursuits such as making music, playing chess, and reading philosophy. He grew up in the rural town of Gidgegannup in Western Australia. You can follow him @courtneybhilton.

Affiliated Graduate Student
Cody is a biological anthropology PhD student at Texas A&M University concentrating on questions in primate sensory ecology including broader work in bioacoustics, face perception, and animal deception. In his free time he enjoys traveling, writing, and the occasional pick-up game of chess. 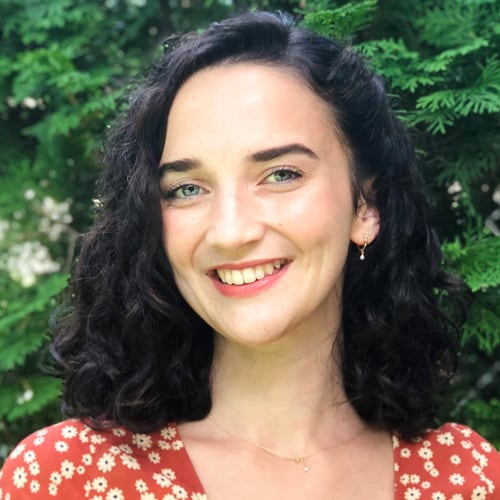 Affiliated Graduate Student
Lidya joined the Music Lab in 2019 as a summer RA, and has since continued to work on projects remotely, from her new home in the Netherlands. She is currently completing a Research Masters in psychology at the University of Amsterdam, and is exploring how humans communicate cross-culturally, in the areas of music and emotion. 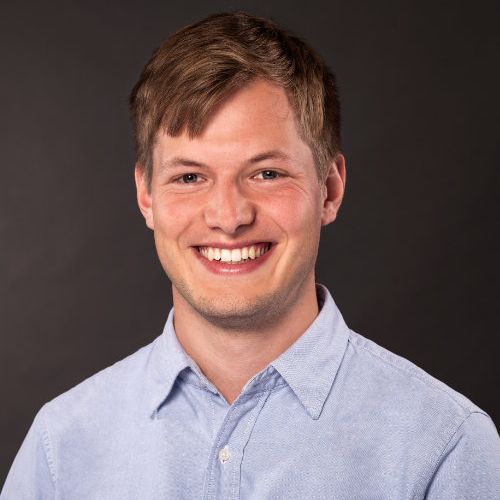 Affiliated Graduate Student
Jan joined the Lab at the beginning of 2019 as a research intern before returning full-time after graduating from his bachelor’s. He is currently finishing up his master’s in psychology: behavioral data science at the University of Amsterdam and has written his thesis with the lab trying to better understand what it is that makes us like music. In his free time he enjoys bouldering and playing tennis as well as the occasional bike ride. You can follow him @_jansimson.

Honors Thesis Student
Joyce is an undergraduate thesis student at Harvard University from Camarillo, CA concentrating in Psychology with a secondary in Economics. She is interested in studying the relationship between music and emotion, and the ways in which music can encourage or discourage certain human behaviors. At school, Joyce is one of the captains of the Harvard Cheerleading team and hosts a radio show at WHRB 95.3 fm, Harvard’s student radio station. In her free time, she enjoys learning how to mix music, dancing, going to concerts, or watching competitive reality TV! Honors Thesis Student
Rachel is a rising senior from Smith College, currently residing in Northampton, MA. As an avid piano player, who also studies psychology and data science, she is curious about the impact of music on children’s social- cognitive development. She has been working on a project looking at how dialect change may affect children’s literacy skills with Peter de Villiers at Smith, and hopes to broaden her scope of research in music. When she’s not working, she enjoys finding good coffee and wondering around the neighborhood.

Undergraduate Researcher
Liam Crowley is an undergraduate student majoring in psychology and philosophy at Victoria University of Wellington. He is currently working on a project investigating children’s ability to predict musical function from a song’s form alone. Outside of lab work you’ll find Liam tending bar at his part time job, and if he’s lucky, hitting the slopes of Mt Ruapehu.

Undergraduate Researcher
Harry is an undergraduate at Harvard University from Brooklyn, New York planning to concentrate in psychology. Current interests include timbre perception, sensorimotor synchronization, and cross-modality in implicit cognition. In his free time, you might find him playing didgeridoo or scribbling in his diary. Undergraduate Researcher
Jing is an undergraduate studying psychology and statistics at Duke University. She is interested in the intersection of psychology and music, as well as how language might interact with music perception. In her free time, she enjoys playing her flute, messing around with the piano, sipping boba, and wandering around the old streets in her hometown Beijing.

Undergraduate Researcher
Brooke is an undergraduate student from North Attleboro, Massachusetts studying cognitive science and music at Yale University. She is interested in studying how animals cognize music in order to better understand the human evolution of music. At school, Brooke sings in and acts as the assistant conductor for the Yale Glee Club, is a teaching artist with the Morse Chorale youth choir, and conducts research at Yale's Canine Cognition Center.

Research Assistant
Ghazal Jessani is a Master’s student at Harvard University specializing in Human Development and Psychology. She recently completed her undergraduate studies from the University of Toronto where she did a double major in Genetics & Biotechnology and Psychology, and a double minor in Mental Health and English. When she is not at school, she can be found volunteering, performing spoken word or practicing yoga!

Research Assistant
Ever since taking an African American ethnomusicology course that wholly recontextualized her background in Western art music, Judy has been trying to uncover how musical collaborations facilitate shared sense of belonging across cultures and between genres. She completed her master’s in Cognitive and Social Psychology at the New School and has worked for the United Nations and a children’s psychiatric treatment center. Her first memory is falling asleep to her mother singing a Korean lullaby about a fisherwoman. You can follow her at @judyleeisme.

Research Assistant
Alex is a psychology and English graduate of Carleton College and recently completed his master’s in Psychological Science at SUNY New Paltz. He is interested in the evolutionary and developmental origins of human psychology and cooperation. He is especially interested in how norms, morality, language, and music function to produce social behavior. In his free time he enjoys science writing, playing piano, coffee, and running outside. You can follow him at @ajmackiel.

Summer Research Assistant
Vanessa is studying at the University of British Columbia, doing her undergraduate degree in Music (piano), with a minor in Psychology. Her interest in these areas have led to the formation of a flute-violin-piano performing ensemble and also to research, currently looking at how culture, like music, may facilitate infant bilingual language acquisition. Away from the piano and her laptop, Vanessa enjoys going up and down mountains, and petting other people’s pets.

Summer Research Assistant
Sumi grew up in Tokyo, Japan and is a passionate pianist since she was 6 years old. She joined the Music Lab after graduating from Swarthmore College with degrees in Computer Science and Mathematics. She is curious about how musical activities impact children’s learning process and their emotional and intellectual developments. When she is not thinking about music or science, she spends her time playing competitive ultimate frisbee.

collaborators, past and present

We also work with many others on the Natural History of Song project: learn more at themusiclab.org/nhs.

Acoustic regularities in infant-directed speech and song across cultures 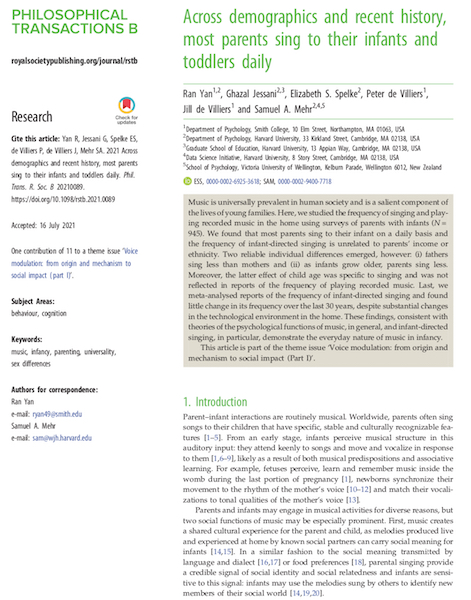 Philosophical Transactions of the Royal Society B

Across demographics and recent history, most parents sing to their infants and toddlers daily 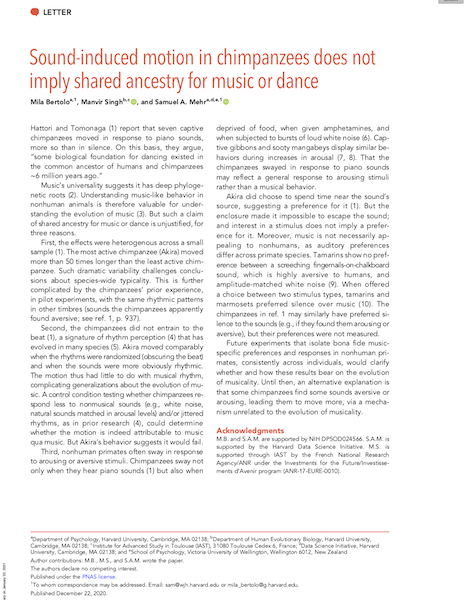 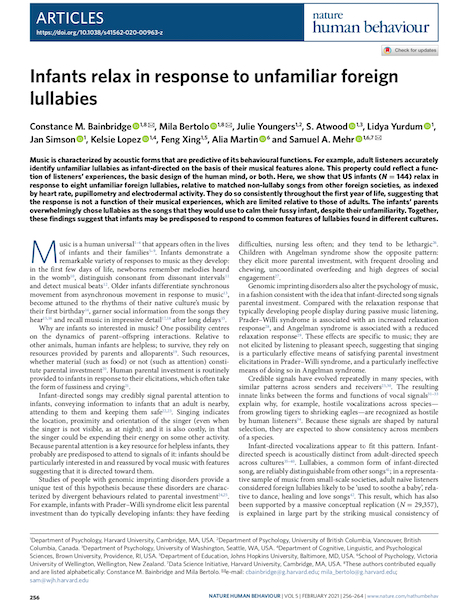 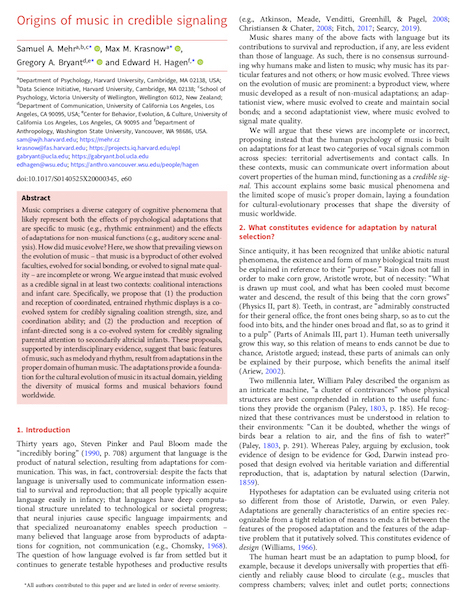 Origins of music in credible signaling 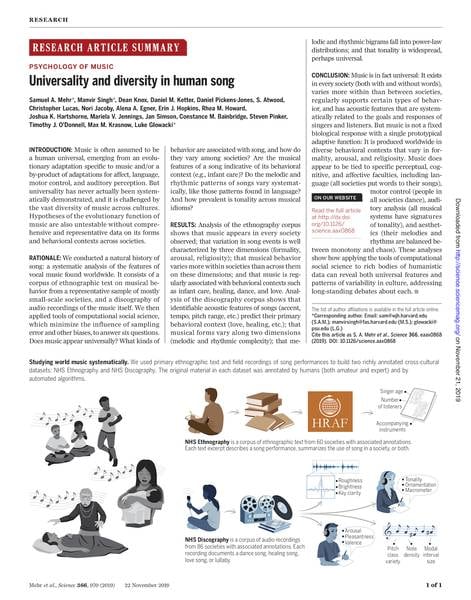 Universality and diversity in human song

Form and function in human song

Genomic imprinting is implicated in the psychology of music

Parent-offspring conflict and the evolution of infant-directed song

For 5-month-old infants, melodies are social

From time to time we hire short-term RAs, who work remotely. If you are interested in such a position, or would like to apply to work with us for academic credit or work-study, please contact us at musiclab@g.harvard.edu. In general, we do not recruit volunteers, with the exception of students who are sponsored by their home institution to do an internship with us.

If you are a member of an underrepresented group in research, and interested in joining us, we can help you get funded with an NIH Diversity Supplement (details). Please get in touch with Dr. Mehr at sam@wjh.harvard.edu if you are interested in applying.

Dr. Mehr is not currently accepting full-time graduate students, but if you are applying to graduate school and are interested in collaborating as a co-supervised graduate student (either at Harvard or at another university), please contact him at sam@wjh.harvard.edu.

We are grateful to have received financial support from these organizations: